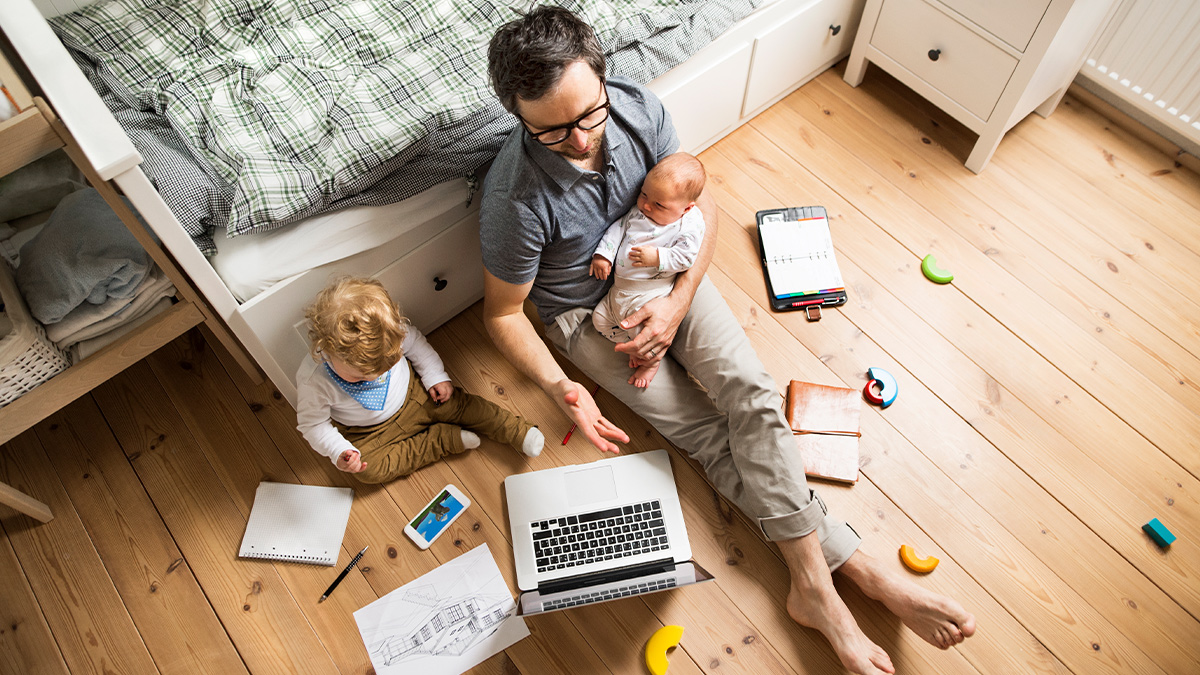 This is either day 14 or week 2 or “Tuesaturday” as far you’re probably concerned by now. You’ve more than likely exhausted what entertainment, food, and cleaning options you have by now, and the days have blended together into one start to finish blur. There aren’t any days anymore, just waking hours and sleeping hours.

So how does one person or one household reclaim some sense of normalcy? That part is actually pretty easy in theory, but how to install it in your household will vary by well, household.

If any of you have ever seen the movie (or watched recently like my family did) Blast From The Past, you know the Webber family lived in isolation relatively happily for 35 years. By the end, they had all gone a little loopy watching and reading the same material for more than three decades, and were not well suited for modern society. But that doesn’t have to be you, I mean you have newish material to watch and read, so of course you’ll be fine.

It should be noted that yours truly is not a medical or mental health professional, so take all of this with a grain of salt. Don’t take it as professional advice, because it’s not.

So you’ve probably made the same meals, watched the same things, and gone on the same walks to the same places day after day. And part of that is because you have limited options, but another part could easily be that you and your family need to sit down and make a really dialed in schedule. Something that makes the average person happy about seeing or doing new things is that it’s something they haven’t seen before. It’s a new wrinkle in a mystery they don’t know the ending of, and that can apply to pretty much anything.

You and your family probably have a laundry list of movies and shows you “never had the time for” before, but that certainly isn’t the case now. It’s time to make a short list of which ones you really want to get to, but here’s the key – don’t binge watch anything. At least not during the work week, save those longer sessions for the weekend. Treat any series like a brand new show, and only watch one or maybe two episodes per night. This will keep a given show lasting longer, as well as keep your interest piqued. Right now, we all need to figure out how to make tomorrow have a little mystery, and the easiest way is to ration some things, even if we don’t need to. This will also give you a chance to discuss what is going on, guess what may happen next, and see who, if anyone, is correct.

Another way to keep days from blending? Limit screen time overall. Figure how much screen time you would have had before you were quarantined, and make a fair effort to stick to that time now. Obviously you were on a computer or phone at work or school but in limited fashion, so don’t just add 8 hours of time if that’s how much time you spent at work or school. Between breaks, time away from your desk, and your commute, you probably spent less time staring at a screen than you think. And if you do want to replicate that time, go for it, but match apples for apples. You weren’t just streaming stuff then, so don’t do that now. Give yourself and your family creative projects to simulate being productive. Write, read, or do something artistic. Don’t just watch, do.

So what do you fill all those hours with? Do the same thing you would if you were still expected at work or school – break it up. Much of what follows are my own thoughts, but I will be elaborating on a schedule created by Jessica McHale.

Fill early mornings with breakfast, coffee, catch up on fun entertainment news (and the real stuff if you’re in the mood) and make sure to check in with your family. If some of your household consists of teenageers, chances are you can’t get two words out of them. But keep trying, you never know when they will finally open up. Have a rotation of who does the dishes after each meal to make sure they don’t pile up, and this should include parents. Don’t just shove the chores on your kids, this is the time to do things together, even the messy stuff. It’s an extra chance to be around the kids you never had time for before, or maybe they never had time for you. It’s amazing the connection a little manual labor brings to people. You never know, you may even discover you like each other.

Before everyone leaves the breakfast table, ask what they’d like to do today, or if there is something they would like to do together. One way to keep everyone feeling taken care of could be to let each person pick one thing to watch or a group game or activity when it’s “their” night. Make it a weekly rotation, and make sure everyone participates. But if someone really wants to be alone in their room, that’s ok, just make sure they know they won’t be able to pick the group activity until they participate in something for everyone else. Alone time is important to the more introverted among us, but being a part of the group is important too, and we need to make sure to establish balance. Everything in moderation.

Now that you are fed, caffeinated, and ready to get a mental workout, next on the schedule should be something creative without watching anything. Write, read, play with legos, draw, paint, anything goes. Just don’t be a watcher, there will be time for that later, this is the time to do. After that, go for a group walk, jog, run, or maybe you have your own gym full of weights. No matter what it is, do something active to get some fresh air and get the blood flowing.

Next, take a real lunch break. It’s okay if not everyone eats at the same time or eats together, or even eats the same thing. Breakfast and dinner are usually held by the group together at the same table, you are usually on your own for lunch, let’s keep it that way. Everyone can make their own, and we’re even going to lighten the rules that they can eat in their rooms if they want, as long as they clean up after themselves. Call it a lunch break, and treat it like one. Let everyone go their own way and take an hour to do what they want.

After lunch, it’s a block of open study. And this session can use technology. Educational video games, documentaries, listening to an audiobook or podcast, mastering a program or application that will help with school or work, it’s all good. Just make sure they are doing something that truly teaches them something, let’s save the games and films that are too much entertainment for later on.

After the chores are done, have a small and healthy snack. It could be time for another cup of coffee or tea as well as we’re near the 3pm wall.

Fill the next block before dinner with free time. Everyone is free to do as they wish, this can be video games, movies, shows, chatting with friends, etc. Let them explore their own interests, even in the best of circumstances, people still need time to enjoy the things that make them happiest and we can only enforce so much group time before someone or everyone cracks.

Dinner should be a team effort, have a rotating schedule of who helps which parent cook and depending on your store of supplies, try to help your kids learn different things to cook, don’t just do the same things over and over. Something important here is the pair that cooks should be off duty for dishes that night. An easy way to give everyone time off is to schedule the pair cooking dinner to do dishes the next morning. That way they get to cook dinner tonight, have the rest of the night off, and don’t have to see a dish until the next morning, and depending on the size of your family, chances are it will be at least another day before they are washing and rinsing again.

After dinner it’s time for your group movie, show, or game/activity. Some kids (and adults too) will need some alone time here, and that’s ok, as long as they interact with the group regularly, don’t let it become an every night thing. Once the group activity is over, everyone can have free time until bed, but you should all do something together before going your separate ways and calling it a night.

After that, it’s time to send everyone off to bed and rest for another big day tomorrow. It’s probably best to maintain something resembling a real schedule, which means not staying up too late, or sleeping in. Aim for everyone to be in bed and lights out by 11pm, and everyone should at least be awake and out of bed by 8am. It’s ok to let them stay up later and get extra rest on weekends, but don’t over do it on weekdays. You don’t need to wake them up at dawn, but they shouldn’t be snoozing until 9 or 10 either.

In order to feel like productive members of society, we have to act that way. Better to have the culture shock now and be ready to return to “normal” life when the time comes, rather than lose any sense of schedule now only to be thrown back into it when they release us all back into the wild.