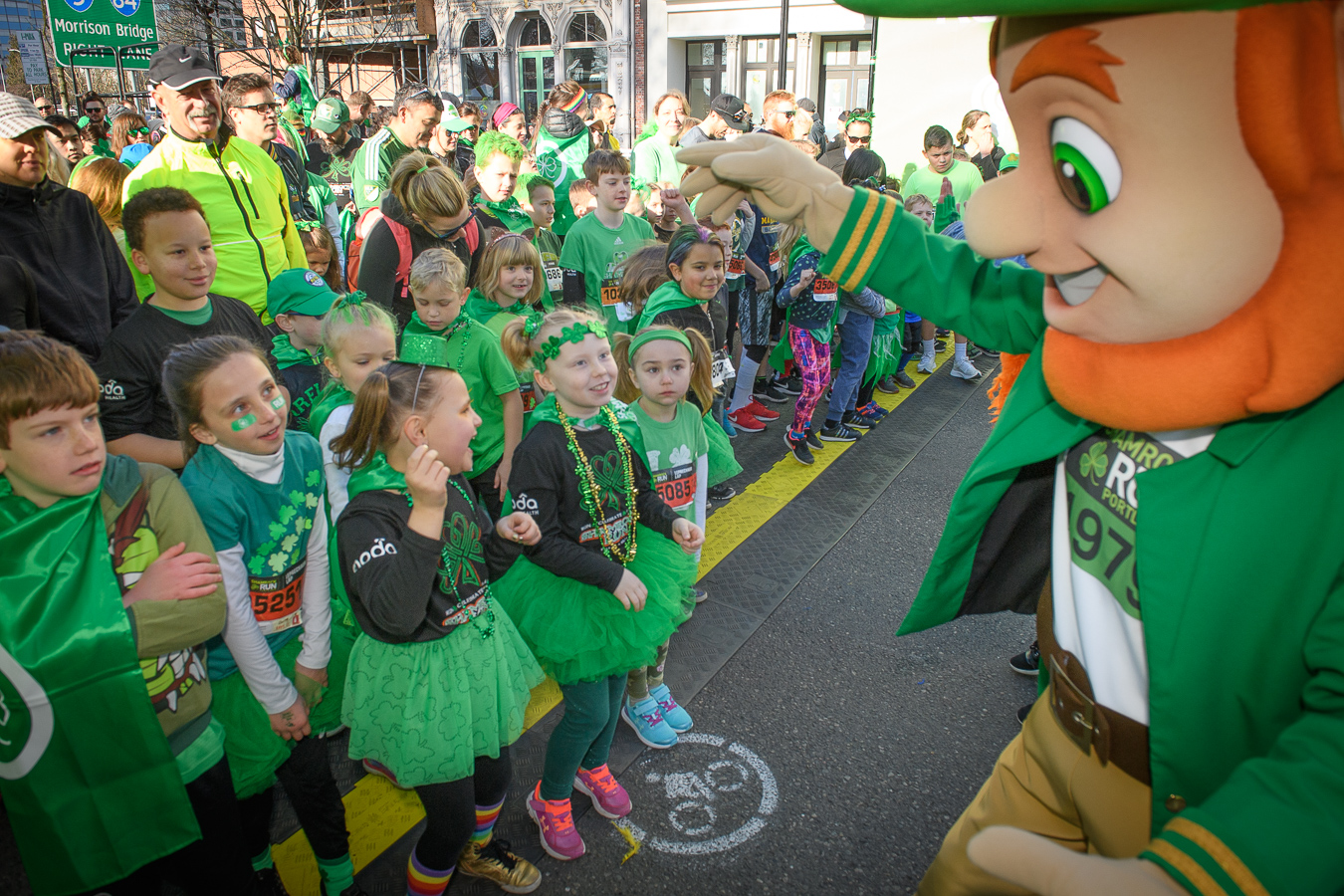 The Pacific Northwest is a fitness fanatic’s dream! The mild weather, beautiful scenery and local enthusiasm can lend way to a sort of call to action.  It begs you to put your gear on (whatever that might be) and get outside in search of some adventure and an elevated heartbeat!

I, for one, would not classify myself as a fitness fanatic but I  do love to get outside and play with my kids. We have four of them with a seven year age difference from oldest to youngest. On any given weekend, we can be found at  a local field playing a game of pick up soccer or finding a new trail to explore. It’s typically pretty laid back and unorganized. We like the freedom to come and go as we please.  So, when we were asked to participate in the Shamrock Run as a family, we were kind of caught off guard. Is this something our family would enjoy? Do the kids even want to run a 5k? Do we want to run a 5k? There were a lot of factors to consider.

With a little persuasion from our kids, we decided to give it a go!  We signed up for the 5k with a group of people from school. We decided not to train as we’re all fairly fit (or rather, our busy schedules and late sign up decided for us).  We were kind of nervous for the kids but they play sports and are pretty active. We thought the older three could handle the run and our toddler would be in the jogging stroller.  We basically told ourselves that if things got too tough out there, then we’d just walk. Not the end of the world, right?

When race day arrived, we laced up our running shoes and dusted off the jogging stroller.  We arrived down at Waterfront Park rather early in the morning. The streets were lined with various vendors handing out samples and revving the runners up. The place was electric!  People young and old were gathered together, many of them dressed in playful, green attire laughing and moving to the music that played over the loudspeaker. There were varying skill levels to behold but everyone was out there to have a good time and accomplish whichever goal they had set for themselves that day.

We pinned on our race numbers and gathered at the starting line. There were a lot of participants so they released runners in smaller groups. When it was our turn, the kids took off.  We anticipated the older boys would do just that and leave us in their dust, so before the race started, we selected a meet up spot at the finish line. I decided to run with my daughter, who was eight at the time, and one of her friends.  They did a great job and didn’t even walk during the race. We caught up to my middle son (10) who was spotted walking and gabbing with friends on the course (we all have our gifts). My oldest son (12) finished well before the rest of us and was waiting at the designated spot when we crossed the finish line.  The kids and I sat at the finish line searching for my husband and our youngest son. We started to get a bit worried as it had been a while since we completed the race and we anticipated them finishing pretty close behind us. We continued to scan the finish line in search of the boys. When we finally saw them, we shouted and cheered as they crossed the line.  My husband looked tired and for good reason. He had jogged roughly three miles pushing a stroller with flat tires! Not our finest moment.

All in all, we had a great time and plan to participate in the future!  The kids loved the atmosphere and the run itself. We all enjoyed hanging as a family at a safe, fun and inviting race.  The Shamrock Run offers many events to choose from. There’s a 5k, 8k, 15k and a half marathon. There’s also a 4 mile fitness walk or the adorable “Leprechaun Lap” which is a 1k run/walk for kids ages 10 and under. All the participants receive a souvenir T-shirt, 12-ounce pour of beer (for participants 21 and older) and a cup of soup among other goodies. This year, the Shamrock Run will take place on Sunday, March 15th at Waterfront Park in downtown Portland.  You still have time to sign up at https://www.shamrockrunportland.com/   Hope to see you out there!

Angela lives in SE Portland with her husband, four kids and their dog.  She views parenting as one of the most challenging yet rewarding parts of her life. Her kids range in age from six to fourteen and each one shines in their own unique way.  She enjoys spending time with family and friends as well as staying active!  She likes attending local events and exploring the culinary scene in Portland.  She’s a self proclaimed foodie who admittedly needs help mastering proteins but claims to make a mean chocolate chip cookie. Some of her favorite activities include spending time in nature, playing soccer, reading, camping, hiking and just hanging with the fam!  She sees each day as an opportunity to start fresh and learn something new.