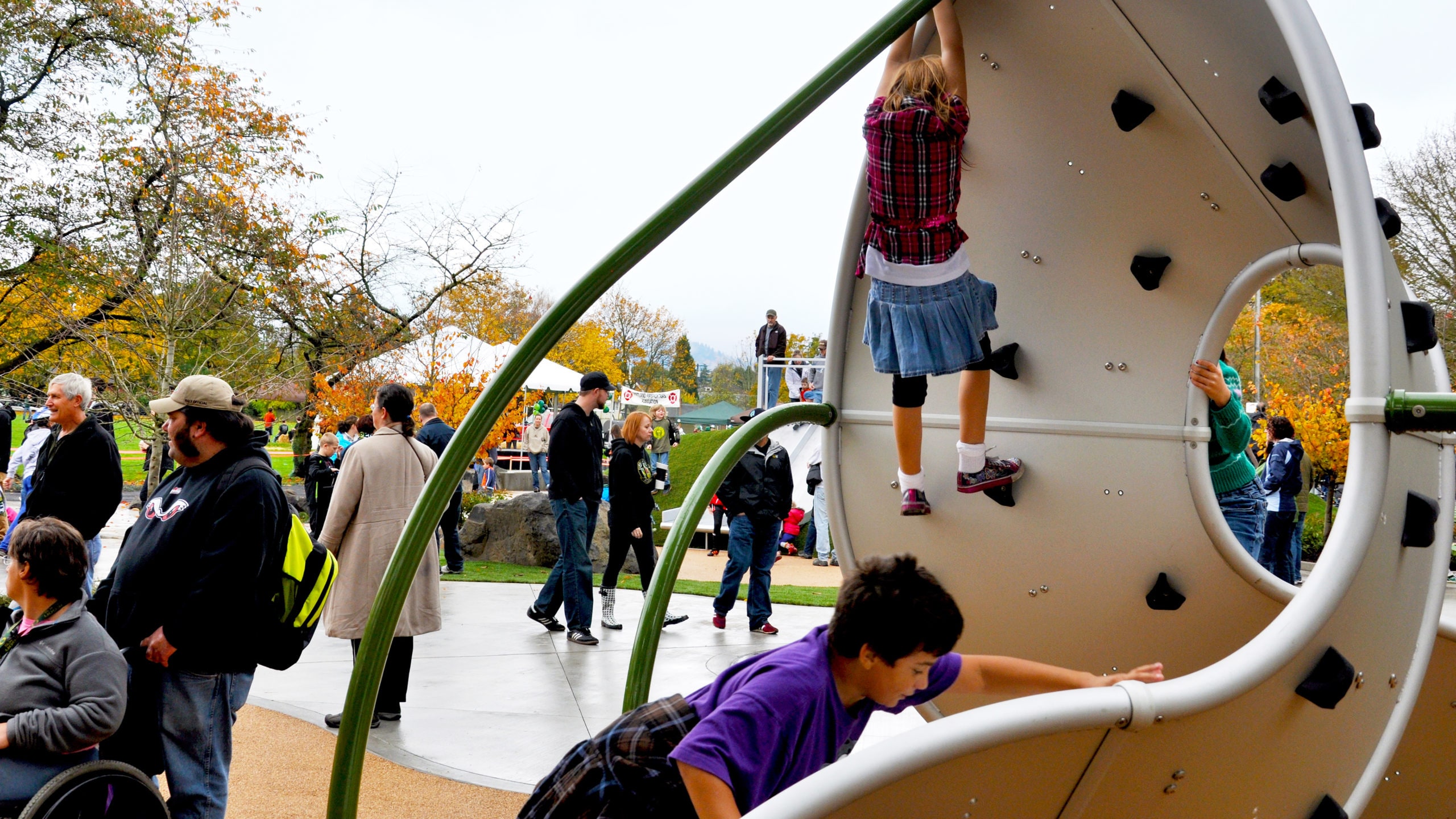 Peninsula Park is home to many incredible community features, including an outdoor stage, rose garden, community center, and public art area. However, among its gems is their playground, the second oldest in the city. Kids will have a chance to climb on balance beams, tunnels, and lots of climbing structures and ladders. They can even play a round of tennis on the park’s courts, play in the water on the splash pad, or have a game of horseshoe in the horseshoe pit!

For parents of disabled children, finding somewhere for them to play can be a struggle. It’s rare to find a playground with options for physically disabled children and those with special sensory needs. With wheelchair-accessible swings and at-grade plat structures, Harper’s Playground is built so that everyone can play. Combining nature-based play with radical inclusivity, the playground also features a rock climbing wall, sand and water features, a merry-go-round, and most beloved of all, a giant xylophone for children to play and make music.

Get ready to be one with nature! The Westmoreland Park Nature Play Playground was built as a pilot project for the Portland Parks and Recreation, which aims to create more public outdoor spaces that get kids more involved hands-on with nature. The park’s play structure features natural materials constructed to encourage kids to engage meaningfully with the park’s natural environment. With giant stone and wood towers and huge sand pits to dig in, kids will have a great time while exploring and learning about nature.

Among the massive Washington Park sits one of the city’s best playgrounds. While at the park enjoying such attractions as the Oregon Zoo, Portland Children’s Museum, and International Rose Test Garden, make sure to visit the park’s play structures. The most significant play structure in the city, there’s no shortage of space to play. With everything a kid could want, including giant slides, lots of climbing space, swings for both big kids and little kids, and massive climbing trees lining the play area, you’ll have plenty to do in between visiting the park’s many attractions!

This beautiful playground looks like a modern art sculpture as it does like a place to play. Settled among huge open grassy fields and hills, the Dickinson Park Playground offers many wide-open spaces for kids to run and play. The play structure features massive DNA-like structures with ropes connecting the pieces, making a unique and creative climbing structure for kids to crawl and climb through. If you’ve got a little one who loves to parkour across the playground, this will soon be their new favorite place!

There’s never a shortage of things to do when you’re playing on the Pier Park Playground! This massive park has tons of features so kids can play all day. The play structure includes accessible features, sensory play elements, and colossal rope climbing structures. In addition to the enormous playground, the park also features a skate park, a disc golf course, a dog park, and a splash pad.